Reboot for Bug Fixes and Tweaks on Arcadia

Arcadia will be rebooted today for software updates and maintenance. A number of bugs have been fixed and Mythic Socketing is now fully available on Rare and Unique items. 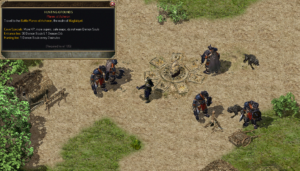 The Battle Planes of Acheron will be released later this week. Fight Maglubiyet, the war god of the goblins and hobgoblins in this high level hunting grounds.

More information will be released soon. Some quest items from this update may already be available in game