My Enquiry | The Legend of Mir
Menu
Log in
Register
Install the app
You are using an out of date browser. It may not display this or other websites correctly.
You should upgrade or use an alternative browser.

I have a question that I would like to personally ask the admin, in a respective manner, I mean no harm or offense in any way.

I'm a loyal player of the game, not to mention the most active player on the game so I believe have the right to know this. I also put my money onto this game for absolutely no reason except for genuine kindness sometimes, I already have the best kit, and highest lvl (warr) yet i still don't hesitate to donate when i can!

Project 69 is a dead server, we have about 3-4 active players, and of the players that currently still play the game none of them are rich enough to donate large amounts of gamegold like some players on cough arcadia, there's only around 2 or say 3 people who actually donate and its small amounts, you agree?

Well my question is if the above is true why is our gameshop more expensive than the gameshop on arcadia?? this is so unfair to be honest, Like look at this pricing.

Andy there is no denying this unfairness, you can't simply ignore this post.
On Arcadia diwari and other torches are 5gg! Project 69 also used to have 5 gg torches but when you added that mini 6 floor map with the most simpleton bosses in mir history, you quadrupled certain items on the gameshop for no reason.. this also lowered the amount of players that donate!

Imagine going to buy milk from a local store to see that its price went from 5 dollars to 20 dollars just because the shopkeeper changed the picture/ logo on the milk bottle. terrible example I agree but it's easy to understand.

I'm going to take it really personal if you don't respond to this mate, if you can't respond here at least respond in pms, my pms are open and always will be

Also how 'bout putting fine grinding oil in game shop for 5 gg , Seriously no joke I would be the first player to buy them in large amounts.

I used to be able to buy 50 diwari for 500 game gold, now 50 diwari costs 1,000 game gold,
To be fair the price of game shop items should have decreased not increased, how could it possibly increase? This is where i get upset...

Imagine you own a shop in real life, that shop used to be an active shop, but after a few years the amount of customers declined rapidly due to unknown .
Now imagine the current amount of customers you get daily range from 0 - 3, not to mention 1 customer on average who just comes in and goes out doesn't buy anything. Would you as a sensible fair shopkeeper decide to increase the price of your products by x4? Is that a wise choice? And how would your loyal local customers who still visit the shop feel, would they be happy? I think not.

I'm proud to say this price increase doesn't affect me much PvE wise, since you only need 900 dc to solo ALL of the bosses in game that can be killed by a warrior.
Swear to god I'm not bluffing, you can log on and ask any player, most of the main bosses/ best dropping bosses we have on our server were created 10 or 8 years ago something like this i'm not exactly sure.

I have double the dc of an average warrior I only kill bosses out of boredom, hoping they will drop me a fine grinding oil for once lol ! 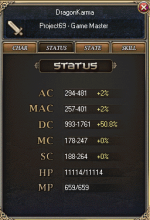