Exploiting / Glitch Unfair :( | The Legend of Mir
Menu
Log in
Register
Install the app
You are using an out of date browser. It may not display this or other websites correctly.
You should upgrade or use an alternative browser.

I am almost certain of WORLD guild of using an exploit / bug or glitch.

Yesterday Sunday 4th Of September there was a castle war on Fortevil, my guild won.. nobody came we won the castle and were declared the owners at 9PM Uk time.

Today Monday 5th Of September, this exploiter warriorlol (guild leader) of WORLD logs on with the castle... how is this even possible?!!

GM this is impossible because if he had declared war after we had won the castle (which he didnt) on Sunday, then there would have been a war on Wednesday at 8PM..
But somehow this cheater logs on at Monday at 1PM and has the castle? makes no sense lol, lets say he declared war and it became bugged so war starts on Monday 8pm instead of Wednesday, also not possible, he would have the castle by 9PM, and not by the morning wtf... 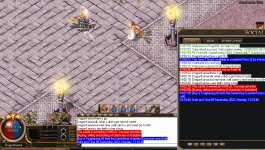 Scorpian please please look into this and if you find them have used exploits or glitch please ban these low lifes they do not deserve to be playing on this server!
This has not been done once but 3 times unfortunately i have only noticed now as the other ones i was inactive and thought they took the castle whilst i was offline

Think it is a bug but not his fault or control.. will have a look

Scorpian said:
Think it is a bug but not his fault or control.. will have a look
Click to expand...

Thank you! Return the castle back to us after you've found out.

And again he's done it! For fucks sake :/ 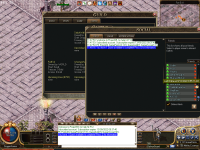 He logged on this morning at 8:55 AM, used that glitch or bug of his and took the castle without even declaring war or going inside, I'm really pissed I've spent a lot of gold declaring war on that castle winning it, then he takes it back again in the morning just by logging on and doing something!

Also I would like to address something to you scorp,
My guild (the most popular and active in the whole server currently and has been for months) is currently facing a "GuildBUILDPOINTCRISIS". 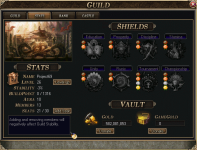 This happens because when you reach level 185, 94% of the bosses in the game (more than the majority) Will not give you GuildBuildPoints, this sucks as its quite easy to reach 185 and when you do so, you'll be making 20 GuildPoints a day max, I remember when I was low level i used to make 450 a day, and now i struggle to hit 25 if I'm bossing as only 3/5 bosses in the entire game do give GuildPoints.

I do not know if this is a part of the game or not this is why I'm reporting it, It's not a bug it seems to happen when you're higher lvl than a boss by x amount and unfortunately I'm double x higher than most bosses in game.

How to fix this: 1) Increase all bosses levels in game by +15 or increase only the majority of ones that are level 140+ since they are the ones that we constantly kill on the server as they are the best dropping bosses and MAIN bosses that we farm.

2) Remove the cap, we kill any boss we like and get the GuildPoints, this sounds reasonable and fair the game after all is dead and there's only 4 players playing who struggle to make progress as a team due to this "GuildBuildPointCrisis", removing the cap would mean we would get more guild build points and eventually have a stable guild (not a level 40 or 30 guild by any chance that's just ridiculously impossible).

3) Increase the amount of guild build points really high level bosses give, I'm seeing some 180 boss give 1 or 3 guild points and a 150 one giving 5 that's messed up, and that 150 boss if i slay it i won't get anything cause i'm immensely higher level than it.

P.S I noticed that you revamped Loki about a year and a half ago, maybe more. I think it's time you revamp it again, It's meant to be a group boss, yet however a 170 warrior can solo it in 4 minutes, and this time when you revamp, make sure it's meant for level 180+ players make it difficult please, thanks, A level change would also be nice on this boss as it gives 15 GBP to players around its level but for high lvl players like me I get nothing, quite disappointing.

I'll let you know if he exploits or uses his bug again.

I think the Guild Build Point awards points until you are more than 35 levels above the boss. I'm certain that's how it is on Arcadia server .. I could be wrong but if I am I'm sure somebody will correct me

UnKnownAngel said:
I think the Guild Build Point awards points until you are more than 35 levels above the boss. I'm certain that's how it is on Arcadia server .. I could be wrong but if I am I'm sure somebody will correct me
Click to expand...

I can't speak for p69, but for Arcadia you are 100% correct. I'd like to assume it's the same, but ye never know with oor Andy

UnKnownAngel said:
I think the Guild Build Point awards points until you are more than 35 levels above the boss. I'm certain that's how it is on Arcadia server .. I could be wrong but if I am I'm sure somebody will correct me
Click to expand...

Yeah it's the same here on project 69, I'm certain bosses stop working after 32+ levels,
Sad thing is most of the bosses we have are from 2011 or 2008 so their levels are pretty much outdated, they are mainly at level 152 and under.

I played for roughly 4 hour or 5 hours and made about 40 guild build points, think I need to make a new warrior then level it to 160 and just farm bosses with it lol seems like the only way :/.

Cant you go clear out a cave and kill supers and champs at a quicker rate then that?

UnKnownAngel said:
Cant you go clear out a cave and kill supers and champs at a quicker rate then that?
Click to expand...

Latest cave we have on p69 is the Prajna Stone Cave and previously it was Naga Desert Tunnel.
There's like three super mobs in each cave floor, maybe less, our game is really small lol (not complaining I'm totally satisfied and enjoy the game)
I'm going to release a long video showcasing all the maps and bosses in the game in a few days. I'll send the link here. 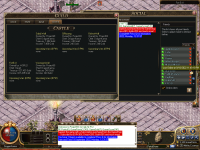 GM I vote you ban this exploiter, this is like the 6th time hes done it! Logs on in the morning and takes the castle without even declaring a war!! this time he took our castle at 11 PM can you believe that? Please either ban this nuisance or remove the castle completely!!

You fixed it, thank you. I really appreciate this.

Remember your kindness will not go unrewarded @Scorpian you will see soon!
-I'm planning on making a big donation soon, As I'm enjoying the game and I've almost completed it after all these years!
Hoping this action might cause you into either releasing orc dungeon or add fine grinding oils as they are both really needed.

The orc mobs are already in the game (don't remove please i've had fun killing them even though they only give 1 xp each) yes and I'm clearly talking about p69 here - (that's me in the picture above). So I don't really see the difficulty of releasing the cave now, I would genuinely be happy if you only released floor 1 that would bring back a couple players let alone releasing the whole cave that might bring back the player base to 20-30 again!

Also you may be wondering why many players did not return back to the game when you released the new map PSC, the reason is simple it's because the cave is small and too easy with almost absolutely no challenge at all! I witnessed players from 2015 logging on trying the map and logging off, few guilds came back tested the map then logged off and never again.

However Orc Dungeon is the complete opposite! Look at this beautiful pic strongest warrior in game + highest level getting killed to death by only 6 mobs! and the mobs are almost 20 levels lower than me. I really see potential in this picture i really damn do. People won't understand by what I mean here I'm saying this because p69 is all really easy everything is extremely easy in terms of killing mobs or bosses but this new mobs they propose a challenge, they will trigger people into coming back and grouping to be able to hunt here, nobody will be hunting solo.

If releasing orc dungeon is a complete "no no", then that's okay just let me know here or in private I'm honestly not bothered even though I'm the only player that actually takes the game serious top #3 on ranking as well. I completely respect your actions and I acknowledge that you may not have time for the server this is completely acceptable and thank you for your time and services.

Lastly, I would like to address a disaster we're currently facing and have been facing for years the nowhere to be seen or heard: Fine Grinding Oil

Fine Grinding is almost impossible to gain if you're a solo player as it only drops from the legendary Evil Mir boss!
You would have to do a:
-90 minute run
-1-2 hours killing boss depending on group size
-Find & Create a group, remember pets don't count as players!

You might / would gain:
1x Fine Grinding Oil good luck sharing that with a group of 3-5 you could use it and it would fail, thus leading you to drop tears of anger.
1 or rarely 2 gold bars, yay 2 mill each

Besides you would never be able to find a group so the only option would be to duo it with me, in which I'd decline since i've killed it a couple times and it only drops as stated above (completely not worth it).

And hey! I'm not asking you to revamp the boss you can leave it as it is, I'm only suggesting you add this item <FineGrindingOil> onto a couple bosses so we can actually use this item that would be so so nice as we do get alot of pure gems dropping but we always leave them on the floor we've been doing this for years now, I would have had 300 pure freezing orbs for sure.

Thank you, and for your patience I understand it must have been frustratingly annoying to read this post but somethings have to be addressed,
I apologize.

P69's down, hopefully something gets changed o.o .
And also hopefully not the orc mobs, theres legit no reason to remove them they serve as a demo of the actual cave that will probably get released in a few years.
I've stopped playing for now for a while as there's nothing much to do however I would come back and play 24/7 if fine grinding oils were added back to the game. as i really like grinding oils they bring me great excitement
You must log in or register to reply here.
Share:
Facebook Twitter Reddit Pinterest Tumblr WhatsApp Email Share Link
Top